It was 8 years ago that I first stumbled into the work of scientists at Oregon State University who were looking to produce a bio-based adhesive that had similar properties to those of the mussels we see clinging to pretty much every marine surface in spite of wave and tidal action. http://oregonstate.edu/terra/2007/04/nature%E2%80%99s-glue/

Jumping off from that same point of view, someone else has gotten, at least, a small part of the problem figured out with an electrical twist. 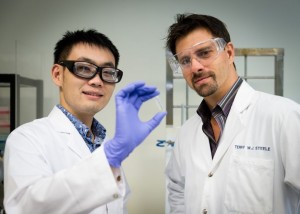 Inspired by the limitations of biomimetic glues in wet environments, scientists from Nanyang Technological University, Singapore (NTU Singapore) have invented a glue that will harden when a voltage is applied to it. This opens a plethora of commercially promising advances such as:

–  Using the adhesive to glue metal panels under water, for example, in underwater pipe repairs;

–  Replacing sutures when there is a need to join body tissues together during surgery;

This innovative research was published last week in Nature Communications, a peer-reviewed scientific journal under the Nature Publishing Group.

The new adhesive, nicknamed “Voltaglue”, opens up a host of possible practical applications, from making underwater repair works for ships and pipes, to being a versatile tool for doctors performing surgery.

In future, surgeons could use biocompatible glue patches to join two pieces of internal body tissue together in one or two minutes, instead of sutures which often require 15 to 20 minutes of careful stitching.

Assistant Professor Terry Steele, the lead scientist for this research project from NTU’s School of Materials Science and Engineering, said it took them over a year to develop an adhesive that could work under wet conditions such as in the human body or underwater.

“Most glues in the market don’t work under wet conditions, much like how sticky tapes won’t work if the surface is wet, since the adhesive will stick to the water instead of the surface,” said the American scientist, who graduated from the University of Minnesota before he moved to NTU Singapore.

Usually adhesives such as superglue harden upon contact with moisture in the air. Others like epoxy, often used in electronic mobile devices, has to be baked in high heat of about 150 degrees Celsius, or made using two different chemicals mixed together. These methods are unsuitable in wet environments.

“We had to find a way to make glue which cures (hardens) when we want it without being affected by the environmental conditions, so electricity was the best approach for us. The hardness of our glue can be adjusted by the amount of time we apply a voltage to it, which we call electrocuring.”

This unique electrocuring property allows Voltaglue to be customised for different applications.

“For example, if we are gluing metal panels underwater, we want it hard enough to stick for a long time. However, for medical applications, we want the glue to be more rubber-like so it wouldn’t cause any damage to the surrounding soft tissues,” Asst Prof Steele explained.

Upon contact with electricity, the reactive carbenes, which are capable of hooking onto any surface nearby, are released. The amount of “hooks” created depends on how long electricity is applied and how many carbenes are present.

This technology is currently patented through NTUitive, the university’s commercialisation arm.

Another distinct feature of the new glue is that it could be made reversible, said Asst Prof Steele. He is now furthering research in this area, aided by a competitive research grant of almost US$670,000 awarded by Singapore’s Ministry of Education won earlier this month.

As the world becomes more concerned about sustainability, companies are looking to design ‘End-of-Life’ products that can be easily recycled, reused or remanufactured into new parts and components so as to reduce waste and energy consumption.

Glues which can cure and be subsequently un-cured through electricity would be the industry’s “Holy Grail”, as automakers and shipyards will be able to assemble and dissemble parts with ease, minimising the need for fixation by bolts, nuts and screws.

Such reversible glue will also open up new possibilities in the global adhesive market in transportation applications, estimated to be worth over US$3.3 billion in 2016 (Adhesives and Adhesive Applying Equipment, by BCC Research)

Moving forward, Asst Prof Steele and his team of 11 researchers are working to improve their new electrocuring glue so it can harden in just a few seconds, compared to about 30 seconds now; and also working on a way to undo the process.

They will also look for the best way to commercialise the technology through a new start-up or via industry partnerships.