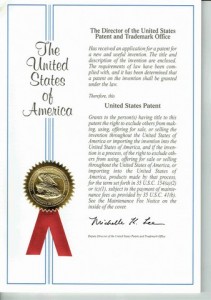 Let’s just imagine that you have been recently slaving away in your very cool, very modern version of Geppetto’s workshop out in your back yard and you’ve come up with something that is every bit as nifty as Pinnochio… only your cool thing is a truly innovative doo-dad for the boating industry.

Suddenly, the heady rush of riches and fame come charging through your brain and it hits you like a huge explosion! “My GOD! I need to get this thing patented before someone finds out about it and swipes my wonderfully inspired effort.”

Well, hold on just one minute there, Pilgrim. Perhaps you better give this article a full read before you rush off to the nearest Legal Office where they practice Intellectual Property Law where simply sitting down with a qualified patent attorney is going to nail your pocket book for some serious cash…. just to talk it through.

Here’s my take on patents for boat stuff in general. All you guys out there in TV land can have your own take on these things and I encourage you to make your points known. It won’t change my opinion on the matter after 25 years of fiddling around producing video programs for start-up companies who blew a large wad on their chase to “get a patent in place” and then fitfully protect the same thing.

Real simple, patents can cost large amounts of money. The more complex the claims in the patent application, the more money it takes for some patent attorney to make use of his selective knowledge of the arcane language of the patent application, seacrh for prior art and establish that your “invention is enough different from what came before and commission a set of equally arcane drawings to show what the item looks like in graphic terms… and then file for the patent itself with the U.S. Patent Office.

If patents could be submitted in normal language, there would be many fewer reasons for hiring of a specialized, Intellectual Property Attornies at $300 an hour to write this stuff for you. After all, who knows the way the nifty new device works better than you?

For most patents, the big cost is in the process of the “patent search” so that you can quote many examples of prior art in your submission and the logical progression of inventions that may, or may not, have led to your device. Again, this is all part of the game, should you need to pursue some violator of your precious patent in a court of law. Notice how it, once again, comes back to a court scenario so that you need to hire another attorney to stand in for you? This is the key part to the argument.

After all, the patent by itself, is nearly worthless, save for the so-called ego boost one might get from being a “patented inventor”. It’s just a crappy, official looking document on your wall that just might impress your buddies when they come to visit. (see the ritualized document at the head of this article) Without the desire and resources, as in MONEY AND TIME to pursue the violators, the whole patent process is absolutely worthless as a business enterprise. Some folks will tell you that it adds value to your invention. Well, that part might be true if you think that the thing is about to set the world on fire and you will see checks for millions of dollars come rolling into your hands. If it’s not of that magnitude, then its value is pretty much up to you and your sense of self as an “inventor of stuff”. These are things that the world, in general, does not find very compelling… well, unless you are Brad Pitt, or somebody like Bruce/Caitlyn Jenner.

My take is that for the average guy, who has developed some really cool thing for the boating industry, the best thing to do is to take all the money that they would otherwise toss at a patent and save it for something else. The intellectual properties attorney, the draftsman who does the nifty and similarly arcane drawings of the invention and the fees at the patent office; Save it for another, more important thing….  May I suggest…. That would be to use that money to invent the next best thing for the boating industry, OR… better yet, spend it on the marketing of the first really cool thing, so that they can achieve something like market penetration and hopefully, a dominating market share before the Chinese rip you off and copy your design and build it with far lesser materials and then flood the market with the fresh idea which you slaved to create.

There is one exception to this patent thing for boaty kinds of things. That being the absolutely inconceivable potential that your patented device can properly be licensed out to a big time boat company for MILLIONS of dollars. Really, MILLIONS… as in the kind of money one might get for inventing a new medicine that cures five kinds of cancer. You know, the kind of cash machine idea that would move the desktop computer industry into the next millennium… Otherwise, it’s a huge waste of time and money and it will give you a false sense of confidence that you really have something worth fighting over.

It is just so damn easy to make a ten-percent improvement in an existing invention that, in the words of the Patent Office, moves the invention forward, that it’s ridiculous. Want to know how simple in actuality this all is… just go to a big tradeshow for any industry, you select the one you prefer, and watch the hordes of guys from Asia running around with digital cameras, taking pictures of everything under the sun that looks even mildly interesting.

Now, what do you suppose those dudes are doing with such a fervent sense of purpose? The answer is, and I hate to dump it on you nice guys who think otherwise, but they are swiping your ideas. They are shooting photos of your stuff so that they can take all that home and reverse engineer it. They will make some very small and virtually irrelevant change in the device and come roaring back next season (or sooner in some cases) with their own brand of your hard-earned super cool, next best thing. Now, don’t get me wrong that it’s only those Asian guys who are doing this. Everyone is doing the same thing, or they will soon find themselves without a job. Well, they will, unless their company has a very high degree of ethics and they have their own super smart inventor dudes who don’t need the leg-up.

Think you can stop that? Think that it matters to them if they “might” get sued by you? Think they worry about your limited financial resources that totally inhibit your ability to mount an on-going legal procedure? Hey, my friend, this is modern business which is the civilized equivalent of open warfare without the explosions. If your figurative army is too small, you can only try to make a hasty retreat and lick your ego, literally.

All this boils down to the fact that you should be spending your lovely time, your creative problem-solving genius inspiration and going down to the shop and inventing that “next best thing”. This will, once again, put you ahead of the market and force the other guys to play catch-up to your glowing capabilities.

Does all this make me sound bitter and hateful? Do you think that maybe I had one of these gotcha experiences myself and have the wounds to prove it? Well, I don’t.

I just worked within the community of hundreds of creative industrial design types, making video-based marketing presentations for them and THEIR really cool, patented new gizmos. Most of them, if their invention was, in fact, really cool, were unceremoniously shoved to the corner of the heady, trade show sales floor by a bigger outfit who brazenly nabbed the idea and had the resources to go full-tilt with it…. Within two years!

If you insist on going for the patent, may I be so bold as to recommentd a really thorough and accurately written book about that very topic..? It’s called: Patent It Yourself and is available from all the usual resources such as Amazon and Barnes and Noble booksellers.

I have this book myself and found it to be so beautifully composed and presented that I routinely use if for reference in these matters. This book will save you many hours of stupid goose chasing and it is written by a guy who knows his stuff.

You, the good guys, had no fall-back position and no fresh ideas, as all your time and money had been spent on chasing that “Hey, I’ve got a patent” concept. Eventually, most of them accepted full-time jobs at the firm which nabbed the invention, where they learned to keep their mouths shut and take that lovely paycheck home to pay for food and clothes for the kids.

There isn’t much that would suck more than that.

My very strong suggestion if you do create something decidedly powerful for the boating, or outdoor recreational market is to LICENSE the thing with one of thoe huge companies who would find the device to be compatible with their corproate efforts. Do make sure to get a Non-Compete document signed with the firm you pitch so that they won;t snag your idea and force you to hire an attoney to get them to stop producing it behind your back. Have them decide if a patent is appropriate, front the costs of all the manufacturing tooling, find the fabricator and defend the patent should someone screw around and try to knock it off. All this stuff is their playground, not yours and while this is going on, you still collect a royalty check for every one of them that goes out the door and maybe even a significant design fee for the actual creation of same.

Brilliant. The wife and kids will find you as their own private superman who brings home an enhanced paycheck to save for college and go on real vacations where you guys can actually VACATE.

These are things that don’t suck at all.