Another Trimaran/Skiff … Bigger, With More Power 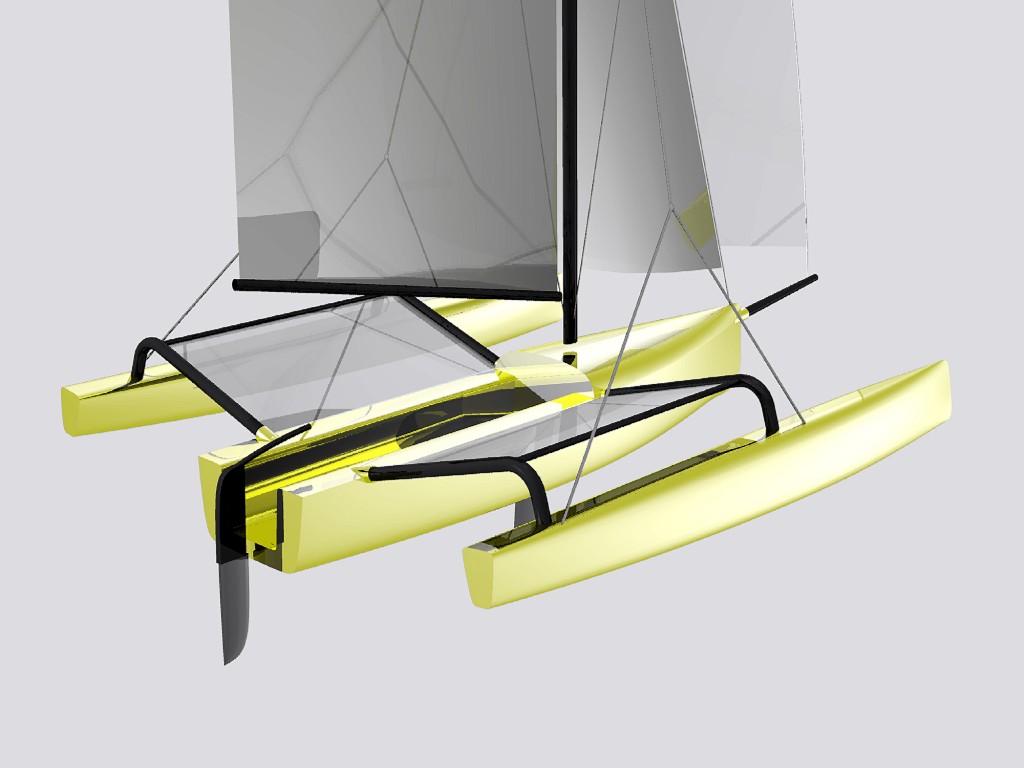 Well, you had to know this would happen…

When the Montage Skiff/Trimaran was introduced, the Lunada Design website was absolutely flooded with an ocean of page hits every day right after the article was posted. I received several dozen personal query letters regarding the boat and sizeable slice of them were directed at the potential of a bigger version of the Montage.

The concept of being able to build your own boat and rig it with a used mast and possibly even used sails, (if they are in good enough condition) had struck a chord with the homebuilding community. The creation of a larger version of the Montage would take the specified rig choices up into the much more commonly found beach cat rig sizes and make the business of finding a used rig in great shape, a whole lot easier. After pencilling a collection of thoughts and running some rough numbers on the potential, the idea came into focus as the 18′ Collage.

The new boat is very much like the smaller Montage in many ways. The Collage has very similar lines, with the exception that it can be quickly 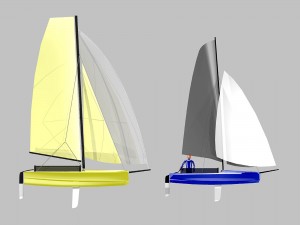 identified by its subtle, reverse bow profile. It has  a virtually identical purpose and the same, functional conceptual pragmatism for the homebuilder. The plywood version and the strip-built design both have the same bow profiles. This profile is also applied to the amas of both build styles. I wanted to give the boat a bit more of an aggressive look without taking it too far in the direction of the out and out racing multihull designs currently in vogue.

The ama shapes, especially on the smooth hulled variation, borrow other design cues from the modern performance dedicated French designs of VPLP, as well as the very cool work of Nigel Irens. The transoms are nudged in the direction of a triangular shape, while retaining some of the typical beach cat, flat-topped U-form feeling. The volume concentration is well-forward, with the foredecks being much more rounded to provide rapid shedding of water. These shapes will help to reduce the tendency of multihulls to pitchpole when sailed hard. 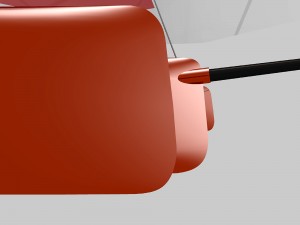 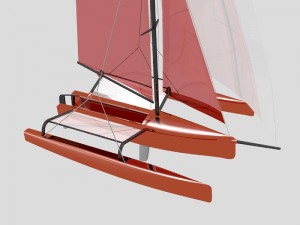 Breaking away to some degree, from the single, build style of the Montage offering, the Collage is presented as a fully strip built, smooth hulled version, as well as a multichine plywood version. These choices will give builders the ability to work with the material choices and aesthetics they prefer. I am also looking at the potential for a foam cored sandwich laminate boat using the vertical strip technique, though that iteration will probably come around a little later in the process. 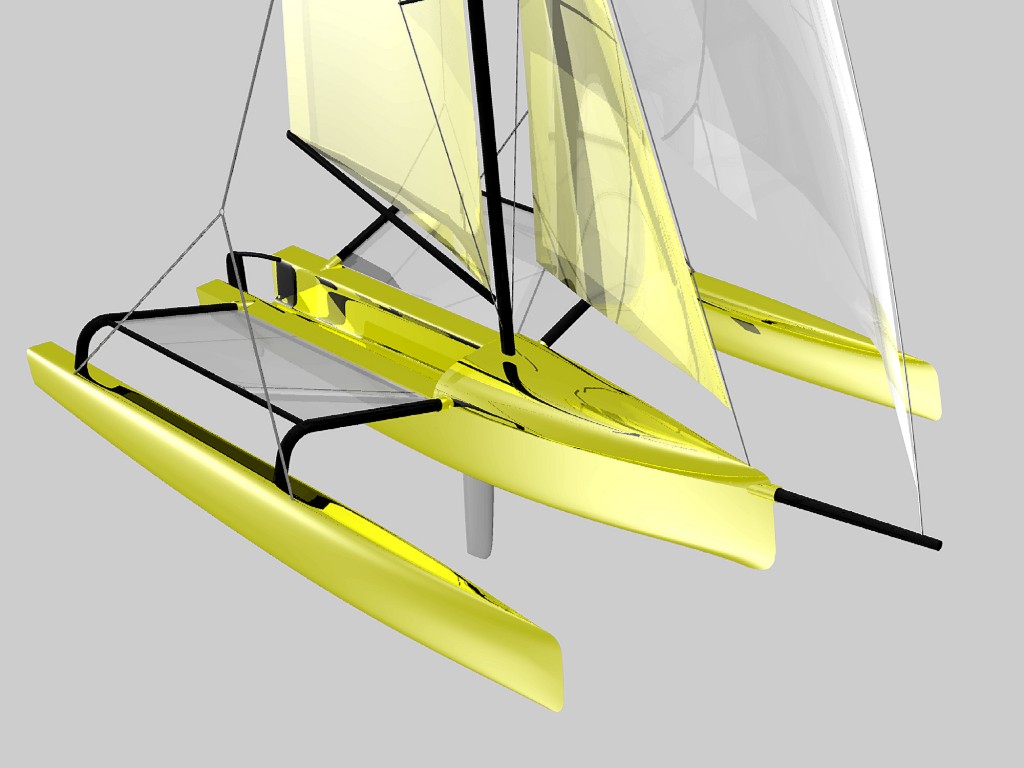 The Collage meets all the same design criteria as does the Montage, except it’s longer and wider, has more sail area, carries more crew weight and yes, it’s going to be faster in the right hands. Faster… sometimes this term can be kinda self-defeating when speed claims are made compared to another boat. When it comes to recreational boats, I’m of the opinion that speed is a relative thing based on the overall design brief of the boat in question. In the case of the Montage and Collage designs, speed is one of the attractive elements as long as it is kept in perspective with  just what the use application will be from day to day. From where I sit, this will be primarily recreational purposes. 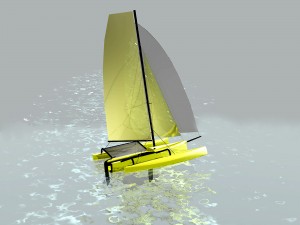 The Sail Area to Displacement ratio ( SA/D ) for each of the boats is as follows: The Montage is 31.56 and the Collage is 34.88 With both of these boats being sailed at near max displacement, I give the nod to the Collage, based on waterline length, as well as the ability to punch through wave conditions that will toss the Montage around to some degree.

I would like to see this pair of boats ( Montage and Collage ) blasting around in the hands of skilled sailors. There’s nothing quite like the feel of a performance boat and the way it can deliver the exhilaration of a spirited ride. But… I’d also like to see this boat out on the water being used by families while they have a really fun day on the water with, maybe, a somewhat toned-down speed blast tossed into the mix every now and then to get the kids chirping. 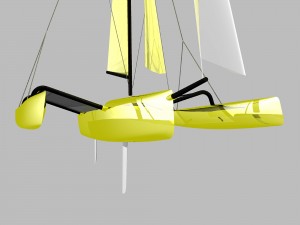 I’m looking at the potential for the Collage to create a new beach and/or lake sailing culture in which energetic hot shoe dudes, as well as young sporting families, can all mingle on the beach, out on the water and share a communal BBQ after the day of sailing. I grew to maturity on the beaches of SoCal watching the brand new Hobie Fleets do this very thing and it was a lifestyle that perfectly fit my beach kid way of thinking. It would be great to see that happen once again. Could this take place in 2009? Hey, I don’t know the answer to that one, but it is fun to think of the boat and its owners in those terms.

There’s a lot going for the Montage/Collage design approach to support such a social event concept. Both boats are affordable to build, they are easily trailered by even sub-compact cars, they make use of “experienced” parts that can be had on the open market for pennies on the dollar when compared to new parts and they are boats that are easily sailed on the first day. This last part is important, as the boat will attract more enthusiasts when they see that they can be sailed with what pretty much passes for beginner’s skills. Just because it can go fast, does not mean it has to be sailed that way. As the owner’s skills grow, the boat’s potential will be there waiting for him. 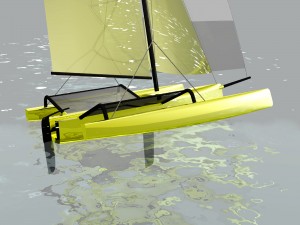 As a way of introducing the Montage and the Collage designs to the homebuilder market, I’d like to offer free plans to one person. This builder should be able to show me that they have a very strong interest in either design and are willing to build the boat as I supply the plans in accordance with their progress from the previous plan set delivery.

If interested in this offer, you can write me at: Chris@Wedgesail.com or at lunadadesign@gmail.com and make your pitch. The one chosen to receive the free plans will be willing to provide construction photos of their progress and a brief written description as to how things are going. The personal accounts will be published on this website, Lunadadesign.net so that the readers of the site can follow the projects.